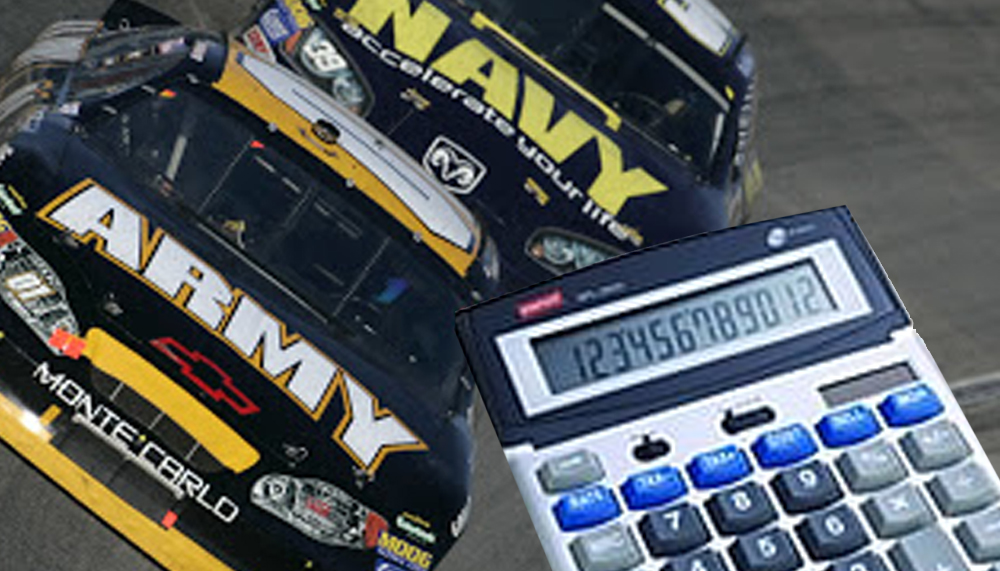 The narrow defeat by Congressional vote this week of the Kingston-McCollum Amendment could be a useful litmus test for many businesses in how they analyze, prioritize and justify budget expenditures intended to make their business more successful. The amendment in summary proposed to ban the U.S. military branches’ ability to spend an estimated $72m in marketing funds (within a $600m+ budget) intended for recruiting thru pro sports. The legislation garnered the most publicity with regard to motor sports, specifically NASCAR, due to the significant military sponsorship programs within the sport.

The military’s sponsorship within motor sports substantially expanded in the past decade, with only sporadic and less significant expenditures prior to that. Higher-profile examples early in the 2000’s include the U.S. Army’s long-standing sponsorship of Schumacher Racing in NHRA. In NASCAR, the Marines had one of the earliest full-season sponsorships in what was then the NASCAR Busch Series and eventually, every other major branch elected to invest in NASCAR sponsorships – including the U.S. Army, Air Force, Navy and even the Coast Guard. But as the cost of sponsorship rose rapidly in the next 5 years, followed by the great recession, those sports marketing expenditures had already come under increased scrutiny internally within the military branches well before introduction of the Kingston-McCollum Amendment.

EDITORIAL NOTE/DISCLOSURE – The genesis of the U.S. Army team sponsorship in NASCAR actually began in 2001. In the early years of serving as business manager of driver Brian Vickers, I had the opportunity to work with a diverse group of persons to convince the Army of the merit in NASCAR sponsorship on behalf of his BLV Motorsports family-owned race team. We first secured sponsorship for Vickers in the USAR Hooter’s ProCup Series from Engineered Machined Products (EMP) in Escanaba, MI. EMP had business contracts with various industrial and heavy truck clients, including a program called the National Automotive Center and U.S. Army TARDEC (Tank Automotive Research, Development and Engineering Center). Those organizations basically were a liaison between the civilian industry and the Army to develop ground vehicle and related technology. EMP introduced us to management at NAC, and both companies strongly supported our efforts to solicit the U.S. Army recruiting command. The subsequent endeavor included our own staff and other key supporters including an Army veteran named Dave Goodman, veteran sports marketer Hal Price, NC Senators and several senior ranking Army commanders. In 2002, BLV Motorsports fielded a NASCAR Busch Series team with U.S. Army and NAC branding. Although the Army was already formally funding the Schumacher NHRA Top Fuel team, no funds were directly received by our team from the Army. However, the collective year’s worth of solicitation, including a formal presentation at Fort Knox, ultimately proved a deciding factor in the decision by USAREC (United States Army Recruiting Command) and its advertising agency – Relay Sports Marketing, to formally fund NASCAR team sponsorship beginning in 2003, albeit unfortunately at the Cup Series level and not with our team or driver.

Contrary to some recent erroneous media reports, it has been well-documented that the demographics of motor sports fans including NASCAR in fact do correlate very well in most respects to the target demographics for recruiting efforts from the military branches. Ultimately, that is the fundamental reason why the military branches sponsor racing activities; i.e., it helps them promote their brand to potential recruits and provides a means for direct contact thru various activities (driver/team PR and marketing efforts, trackside hospitality, etc…) to formally engage and convert potential recruits to actual ones. And there are many equally legitimate, but less financially objective, synergies between motor sports and the military.

The true underlying debate over this subject is one that faces businesses every day – where are we spending our money, why and how do we affix some form of return on investment (ROI) measure to justify doing so? In working with a variety of businesses, I find this is a constant challenge, whether involving administrative, management, engineering, sales/marketing, R&D, manufacturing, etc… The internet and digital technology has revolutionized in countless ways the manner by which companies can more quickly and more accurately monitor and track both expenditures and results. But the direct correlation between those two factors largely remains a hit or miss proposition and varies widely by company, industry and topic. Small businesses in particular often struggle to make objective budgeting and expenditure decisions: due to lack of resources, offering a product or service with unique characteristics, or simply having an owner who is more comfortable making decisions based on instinct. Unfortunately, the most critical investments that truly can make or break a business’ success may sometimes be viewed as line-item expenses that are sacrificial, especially when facing challenges. Is a product/service upgrade or other major change necessary to help the business expand further, and thus discretionary, or does avoiding it to save immediate expense ultimately lead to decline (Re: RIM/Blackberry)? What about key personnel? Many small business owners struggle to quantify the value in highly-experienced “A-level” personnel: but are you better off not hiring your most talented staff or letting them go, only to find out that the value of their contributions was exponentially higher than any gains you realized immediately without them (Re: Apple’s parting with Steve Jobs circa 1985)?

I appreciate the Congress members’ concerns over how our tax dollars are being spent, particularly in these challenging economic conditions. Further, the increased scrutiny on the subject brought about by the legislative efforts and related press will certainly push the military branches to more aggressively review and substantiate where their budget dollars are spent and what substantive returns they are delivering.

But concerns I have with the Kingston-McCollum Amendment are that it represents: (A) a blanket statement that sports sponsorship are ineffective for the military (B) a form of disempowerment of those military branches, their recruiting divisions and advisors in their ability to independently determine the best methods to accomplish their prescribed duties. And historical precedent has consistently shown that blanket statements or positions often lead to “war”, both literally and figuratively, and that politicians are more effective at determining IF we should be in a war, rather than HOW to fight it.

For business owners facing challenging times, it becomes particularly important to consider the short and long-term consequences of their budgeting practices, because your best assets are often not the cheapest – or simplest to quantify in terms of ROI. As one client of mine likes to often say, “Don’t walk over dollars to save pennies.”