What is Your Home Trading For Today?

A Break in Your Routine: Overview of Disability Insurance 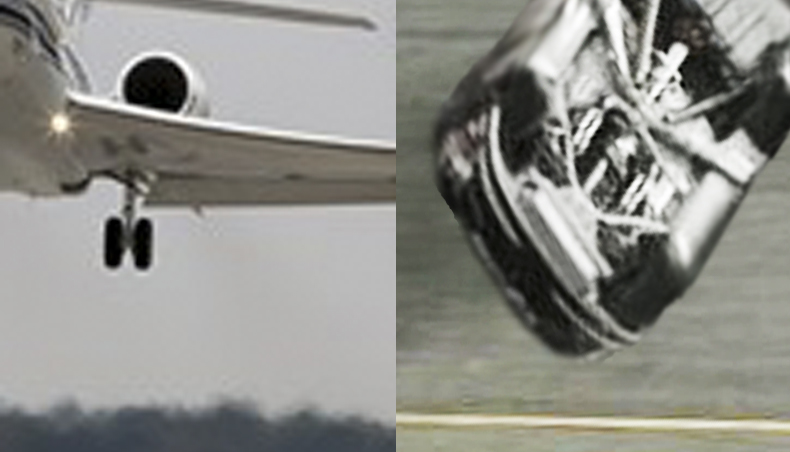 Carl Edwards, right, flips into the catch fence as Ryan Newman (39) slides along the wall on the final lap of Aaron's 499 NASCAR Sprint Cup Series auto race at Talladega Superspeedway in Talladega, Ala., on Sunday, April 26, 2009. (AP Photo/Rainier Ehrhardt)

Following Round 2 of the “Carl Edwards VS. Brad Keselowski Take Flight” drama, it has been interesting reviewing comments and the questioning of NASCAR’s ability to prevent race cars from getting airborne (and in sub-context, the potential influence and effects of the COT’s rear wing – soon to be replaced once again with a traditional spoiler). As competitive speeds have continuously increased over the years, race cars in virtually every discipline – not just NASCAR, get airborne under the right circumstances.

In 1999 at Le Mans, for example, the Mercedes CLR race car infamously became airborne in multiple instances, leading to the immediate retirement of the car and program. Drag racing cars, from Top Fuel and Funny Car, to full-bodied production models like the Pro Stock and Pro Modified classes, have experienced various types of incidents where the cars have become airborne. And IndyCars, with 200+ mph average lap speeds at many oval tracks and aerodynamic design more closely resembling an aircraft than a production automobile, have experienced numerous incidents where one or more race cars have went airborne with dramatic results.

For those of us lacking a graduate degree in mathematics, fluid dynamics or perhaps even history, Bernoulli’s Principle is a general reference to mathematical equations related to fluid dynamics attributed to Daniel Bernoulli, a famous mathematician from the 18th century. In layman’s terms, it states under certain assumptions that an increase in the speed of a fluid occurs simultaneously with decrease in pressure. When applied to a physical object such as a properly designed airfoil (ex. – an aircraft wing), it means the air flowing past it moves faster over the top than underneath and thus generates lift (i.e., getting airborne).

You most commonly hear Bernoulli’s Principle in reference to the sub-discipline of aerodynamics and aircraft. However, there is nothing rooted in the science of the principle that prevents it from being applied to any object with a particular shape and attitude, such as a race car turning sideways at close to 200 mph. It’s important to note the fact that the typical range of peak speeds of 150-180+ mph that a NASCAR race car sees at most super speedways (1.5 mile or longer tracks) is comparable to the V1 lift-off speed of 130-150 knots applicable to most jet aircraft. So when Kurt Busch enters Turn 1 at Atlanta Motor Speedway, the airspeed of his Dodge is essentially the same as his Lear Jet when it lifts off from the runway at Clayton County Airport near the track!

As the sanctioning body responsible for the welfare of the sport, its participants and fans, NASCAR has done a very effective job developing periodic modifications to its race car to help minimize the likelihood of one getting airborne. The most notable and arguably significant such development was the roof flaps, which work similarly on the principle of airflow, using low pressure to deploy and disrupt the airflow around the race car while in a lift scenario.

Certainly, keeping race cars on the track where they belong is of critical importance to not only the welfare of the competitors themselves, as well as the fans, but the sport itself. Maintaining proper insurance and liability coverage is critical and underwriters get extremely nervous when there are accidents with injuries, particularly to non-participants. NHRA, the fastest of the sports with peak speeds exceeding 300mph in the case of the nitro classes, has faced almost continuous rules changes over the past decade in an attempt to reign in the continuously increasing speeds, and the various problems besides race cars getting airborne that can accompany them: for example, the ability of the tire manufacturer to build a tire capable of safely handling the conditions.

Scott Kalitta’s tragic fatal accident at Englishtown Raceway in 2008 led to NHRA even shortening the length of the measured race distance to 1,000 feet. NASCAR has worked closely with its host tracks in recent years to improve the safety of its competitors with impressive developments like the SAFER barrier, but has also taken additional steps to help minimize the chance for injury to fans when a race car does get airborne: taller and stronger fencing and restricting seating closest to the track, for example.

But contrary to some critics’ recent comments following the sequel of the Edwards-Keselowski dust-up and the No. 12 flipping at an intermediate track, the root cause is not the COT, nor the rear wing, but rather something at the root of the sport’s success – speed. Speed is the key variable influencing Bernoulli’s principle and whether an object is influenced by sufficient lift to become airborne. As today’s modern race car has become significantly lighter, faster and more aerodynamic, the possibility of getting airborne has increased correspondingly.

For critics to expect NASCAR to completely eliminate the possibility of a race car getting airborne, one would have to expect a race with significantly lower speeds and in NASCAR’s case, no contact between competitors. That doesn’t sound like a race I would pay to watch!